Check here for news and updates on Sault Police activity.

On April 2, 2020 officers with Patrol Services arrested 33-year-old Jean-Claude Paquette on the strength of outstanding warrants. On April 2, 2020 at 10:45 a.m. officers saw the accused walking on Wellington Street West and knew him to be wanted for failing to comply with an appearance notice. He was arrested on the strength of the warrants. A subsequent search of the accused found him to be in possession of a 13.9 grams of a substance believed to be crystal methamphetamine with an estimated street value of $1,430. He is charged with two counts of possession of a controlled substance…

Male Charged with Assault with a Weapon

On April 2, 2020 officers with Patrol Services arrested 32-year-old Justin McKay for assault with a weapon. It’s alleged on April 2, 2020 the accused threatened several people with a knife in the John Street area, then when leaving the area he kicked a vehicle driving by, damaging the headlight and bumper. Police located the accused in the 200 block of Cathcart Street and he was arrested. He is charged with assault with a weapon, uttering threats, mischief and breach of probation. He is scheduled to appear in court on June 15, 2020.

Male Charged with Possession of a Controlled Substance

On April 2, 2020 officers with Patrol Services arrested 29-year-old Richard Paquette for possession of a controlled substance. At 2:01 p.m. on April 2, 2020 officers responded to a call for service regarding a male attempting to break into a residence in the 100 block of Breton Road. When police arrived they located the accused, who matched the description of the person attempting to break into the residence. Officers discovered the accused was wanted for failing to comply with an appearance notice and arrested him. A subsequent search of the accused found him to be in possession of a small…

The Sault Ste. Marie Police Service has recently received reports of young people gathering at local schools. Due to the state of Emergency in Ontario, all schools, parks and playgrounds in our community are closed. We want to remind everyone in our community to avoid those areas at this time. Parents and guardians, please have the conversation with your children so they understand why they need to avoid gathering together. For the latest information pertaining to the City of Sault Ste. Marie operations visit here.

Please view Chief Hugh Stevenson’s message on COVID-19 and the enforcement of the emergency order to limit gatherings to 5 people under the Emergency Management and Civil Protection Act.

Two Charged with Break and Enter

On March 27, 2020 officers with Patrol Services and Investigation Services arrested 23-year-old Isaiah Lewis and 22-year-old Brent Boissoneau-Stone for break and enter. On March 26, 2020 officers responded to three break and enters to a business in the 0-100 block of Dennis Street. Each time a variety of alcoholic beverages were reported stolen. Later in the evening on March 26, 2020 officers responded to a complaint of a verbal altercation in the 0-100 block of Hughes Street. While at the scene officers developed grounds to believe two of the people involved in the verbal altercation to be connected to…

On March 26, 2020 officers with Patrol Services arrested 31-year-old Joshua LeClair for assault. On February 21, 2020 the accused attended a business in the 0-100 block of Great Northern Road. He was asked to leave by store security and it’s alleged he struck a security staff member in the head and fled the area. He was located on March 26, 2020 and arrested without incident. He is charged with assault. He is scheduled to appear in court on June 8, 2020.

The closure of non-essential businesses in Ontario to address the spread of COVID-19 may cause business owners to worry about the safety of their business and property. We’ve put together a list of tips for business owners that may help prevent crime to their business and property. We suggest business owners; Remove valuables from storefronts to help reduce smash-and-grab thefts; Remove all cash from the till and leave it open. Place cash tray in plain view on the counter to signal there’s no money in the till; Remove all signs from windows so police are able to easily see inside… 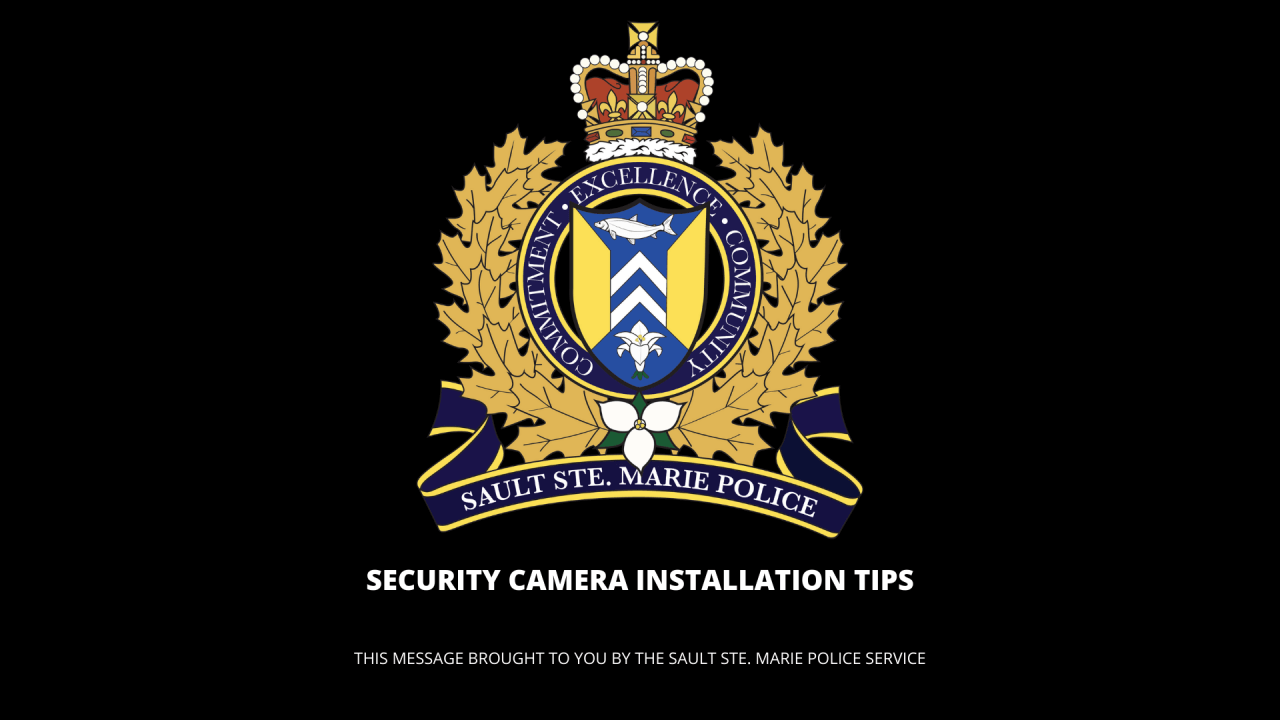 Detective Constable Mike Rogers provides a couple simple tips on how to best install security cameras to protect your property. By following these tips, you are more likely to capture a quality image of any suspect involved in potential property crime incidents. Please note: This video DOES NOT feature a real crime in progress. This is a reenactment.